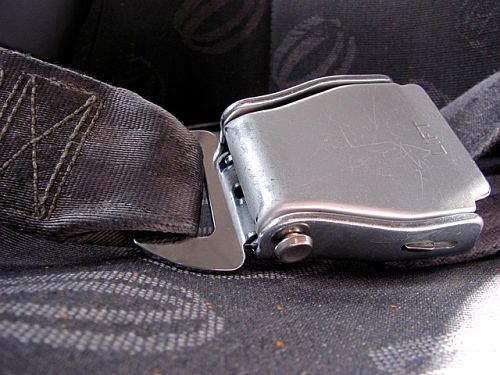 The National Transportation Safety Board (NTSB) says that 84 percent of all Americans use their seat belts today and this is up from 58 percent in 1994. Furthermore, according to the NTSB, wearing a seat belt is the single most important thing you can do to improve your odds of surviving an accident. It wasn’t always that way, though. In fact, it wasn’t until the 1950s that seat belts were even an option in most automobiles. Here’s the story of this remarkable lifesaving device.

In the first half of the 20th century, little attention was paid to automotive safety. In fact, safety equipment was usually just considered additional “features” by the marketing guys.  The mantra was that safety is nice but styling sells cars. Take a look at the inside of the cars of the 1950s, for example, and you’ll be amazed at what you see. Styling was king so interiors were filled with hard, multifaceted surfaces and lots of pointed objects…and yet no seat belts. It’s no coincidence that the fatality rate in car accidents was significantly higher than it is now.

Americans may have been slow to develop seat belts but in Scandinavia one car manufacturer took it very seriously. Nils Bohlin was convinced that seat belts needed to be in cars. He was a Swedish engineer who had designed safety gear for Saab airplanes before joining Volvo in 1958. For those that know Volvos, safety is in their DNA. When Bohlin joined Volvo, he was put in charge of their safety engineering group and the design a new seat belt system became top priority.

Bohlin was first an aircraft designer so he knew that aircraft used a four-point harness system (two lap belts and two shoulder belts). As Bohlin stated, though: “The pilots I worked with in the aerospace industry were willing to put on almost anything to keep them safe in case of a crash, but regular people don’t want to be uncomfortable even for a minute in their cars.” So he started working on a design that people would find comfortable and convenient. “It was just a matter of finding a solution that was simple, effective and could be put on conveniently with one hand,” he explained.

After much research, Bohlin came up with the three-point seat belt, which ran across the occupants chests and the lower torsos with a single belt that buckled near the hip. Tests of this new harness proved it worked very well and Volvo made it standard equipment in all 1959 Volvos. By the time Bohlin died in 2002, Volvo estimated that one million lives had been saved worldwide by his invention. As Urse CDJR of Morgantown, WV, a Chrysler, Dodge, Jeep, Ram dealer points out, not only did seatbelts save over one million lives, it also probably saved the automobile companies 1000s of lawsuits.

As we mentioned before, according to the NTSB wearing a seat belt is the single most important thing you can do to improve your chances of surviving an accident. In fact, the one out of eight Americans who don’t wear their seat belts account for nearly two-thirds of all the fatal accidents.  Make sure that everyone wears their seatbelt in every car you drive or ride in.

How to Avoid Common Errors While Filling The W-7 Form

4 Things You Should Consider Before You Buy a Law Practice

The Top Five Reasons to Rent a Party Bus