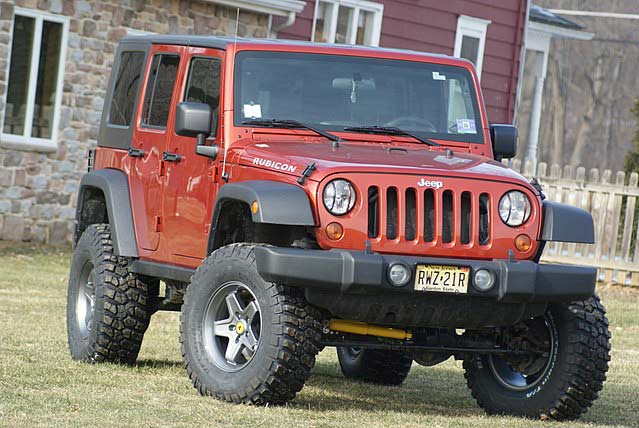 Jeep Wrangler’s 2018 model is out and although it may seem the same, a lot has changed. The action-filled adventurer’s rugged style is the most iconic exterior design ever. The Jeep Wrangler is recognizable even from afar just like the Porsche 911. Jeep has maintained the iconic look and feel of this indirect descendent of the CJ Jeep; the boxy design, two (or four) doors, tapering nose design, extra wheel at the back, fold-flat windshield and removable soft (or hard) top. The Wrangler has been around for decades now and has seen some serious changes through the years. The first Wrangler was designed to be more comfortable on the road and to be used as a daily ride, while, packing all the beastly weaponry for the wild off-road tracks, and it has kept well do its job.

The All-new Jeep Wrangler is ranked among the top 3 off-road SUVs of the world and is designed to tackle all the challenges of the wild off-road terrains. Not just that, now you get the off-road capabilities of the Jeep Wrangler with all the leading-edge technologies and resembles of the modern SUVs.

The Jeep wrangler JL may resemble the previous year’s JK model, but a lot of changes has been made including; the roll centre is raised, the shocks are repositioned, the wheelbase is longer, the track is wider, there’s a new roof mechanism, new engines, and the doors are easier to remove now.

Jeep still needs to work a lot on how the car feels on the tarmac. The Wrangler might have a sophisticated chassis now but the feel of the car is still the same. The ride is stiff but you can’t complain about the comfort. It leans in while cornering, but overall is stable on winding roads.

The Jeep Wrangler’s base engine remains the same as it has been for years; the 285 horsepower producing 3.6 liter V6 engine. But this year, Wrangler is also available in another variant; a hybrid, turbocharged 2.0 liter four-cylinder with a mild electric assist.

Great news for the Wrangler enthusiasts, the interior of the Wrangler has greatly improved and brings the technology that its rivals have been offering for a while now. The two-door Wrangler has seating for four persons while the 4 door model can accommodate five persons. It also features two full sets of LATCH connectors. A 5-inch touchscreen (with options of 7 or 8.4 inches also available) is added with other features like an eight-speaker infotainment system that supports Apple CarPlay and Android Auto.

Jeep Wrangler has improved a lot with its roof. The jeep is now being offered in three variants; the regular hard top with removable panels dubbed as the Freedom Panels, a retractable electric canvas roof that slides along the top frame rails, and the full canvas variant with rubber and plastic. The Jeep JK soft top has improved greatly and is now easier to remove. The major change is that instead of using a system of Velcro and zips, it now uses sections that slide in. It is now easier to remove the hard top because of the re-engineered roof mechanism that now uses latches and catches.

Why You Should Consider Studying for a Degree in Music Education

The Negative Physical and Mental Effects of Stress